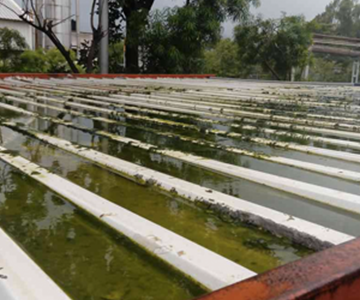 Microalgae are among the most productive biological systems for generating biomass and capturing carbon. Algae are estimated to produce two- to tenfold more biomass per unit land area than the best terrestrial systems. There are several reasons for the greater biomass yields of algae compared to higher plants. Generally, algae have higher photosynthetic efficiency than land plants because of greater abilities to capture light and convert it to usable chemical energy.  Under ideal growth conditions algae direct most of their energy into cell division (6- to 12-hour cycle), allowing for rapid biomass accumulation. Also, unlike higher plants, unicellular algae do not partition large amounts of biomass into supportive structures such as stems and roots that are energetically expensive to produce and often difficult to harvest. In addition, algae have carbon-concentrating mechanisms that suppress photorespiration. Algal biomass can be harvested at any time of the year, rather than seasonally.
With the ability to capture as high as 90% Carbon dioxide, microalgae can potentially be exploited for CO2 capture and sequestration. The use of algae for CO2 sequestration has several advantages: mitigating CO2, the major source of global warming as well as producing biofuels and other interesting secondary metabolites. In general, one kilogram of algal dry cell weight utilizes around 1.83 kg of CO2. However, the major problem associated with the biological use of flue gas CO2 are the high temperature of flue gas and the presence of NOx, SOx as well as other impurities of the fossil fuel used.

A robust algae production system requires a single or consortium of algal species selected based on preliminary screening for efficient bio-fixation of CO2. An elaborate collection, identification, isolation, lab scale cultivation and screening for CO2 tolerance should have been completed before initiating a pilot scale plant installation. This process starts from identification of fastest-growing, highest-biomass-yielding locally available strains with high photosynthetic efficiency and ability to grow well in a wide range of environmental conditions such as temperature, light, along with value addition potential with minimal biomass penalty

The harvested biomass can be utilized to make several products depending on the quality and quantity available from the microalgal cultivation system. Several options like bio-fertilzers, aquaculture feed, bio-energy, biogas, biochar, pigments, and other value added products can be considered after achieving considerable microalgal biomass from the pilot scale systems.

Summary of work carried out by PERC

Addition of 30 L per day did not decrease the pH considerably showing that this pond can take up still higher volume of scrubbed water. The algal consortium employed in this study grew very well as evident from the OD observations and dry weight measurements. When an optimized use of fertilizer mix as recommended by PERC was employed there was an improved growth accompanied by better pH control. On an average dry weight of 0.5 g/L/day was achieved which is very significant in terms of productivity, as productivity is a measure of carbon fixation (for 1 g dry weight of algal biomass 1.86 grams of CO2 is fixed). The CO2 fixation potential of raceway pond is approximately 1 gram/L/day.

It was advised to carry out further observations by adding 100 L of flue gas scrubbed water to assess the capacity of algal pond at take up more flue gas. Under higher pH (>7) most of the CO2 will be in the form of bicarbonate. Instruction has been given to follow changes in bicarbonate in order to assess the carbon removal efficiency of the system. The observations are on right now. To minimize costs due to nutrient addition it was decided to utilize the wastewater generated at ONGC Hazira plant.

The objectives of selection of micro algae, growing in a pilot plant at Hazira using scrubbed water have been achieved in spite of the fact that raceway pond is not the preferred system by PERC. Very high growth rate and dry weight were achieved with raceway pond and in the opinion of PERC this productivity will improve considerably if a hybridized vertical system with advanced illumination system (PERC’s) is installed while scaling up. Algal biomass has been provided to BITS GOA for further processing and methane production.

PERC is of the opinion that a hybridized vertical system fitted with advanced illumination/aeration panel (PERC’s design – Patent pending) with a tank depth of not less than 2 meters is suitable and only viable process for large scale flue gas mitigation systems based on micro algae. This will address the problem of space availability (100 times lesser space required than the conventional system) and efficiency required to handle the flue gas generated by the industry. 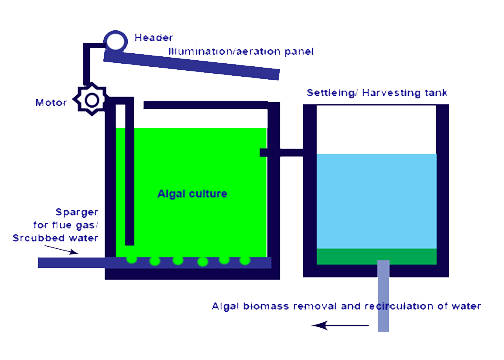