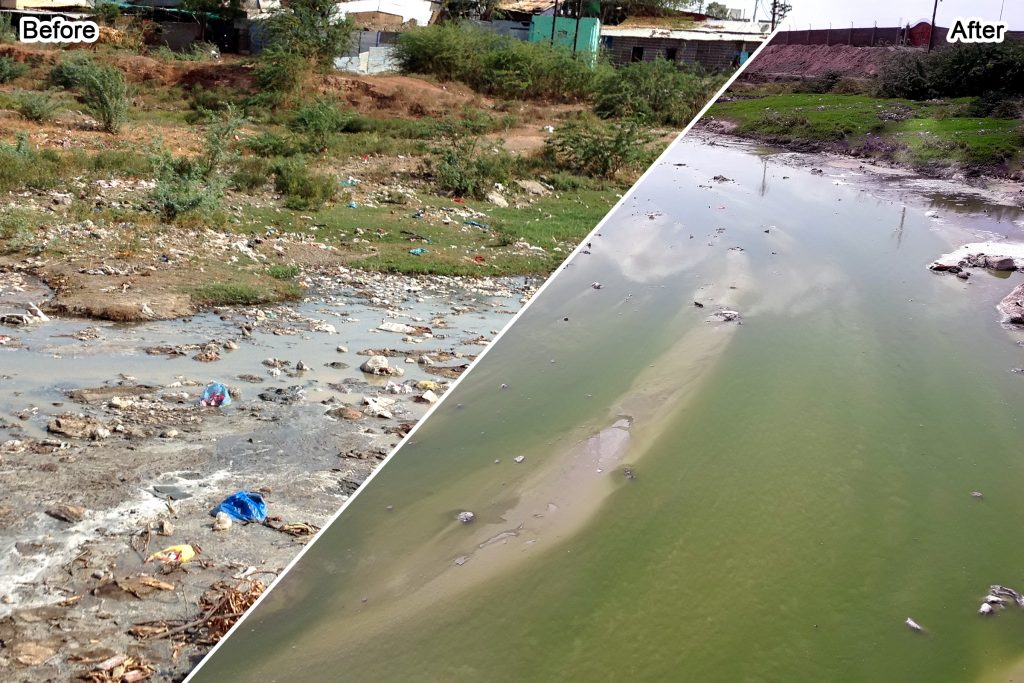 Ponds, lakes, rivers and other waster bodies are getting polluted through discharges from agricultural run-off, sewage discharge, industrial effluents etc. Due to excessive loading of chemicals and nutrients (eutrophication) sudden blooming of hazardous algae – mostly blue green algae – occurs, eliminating other species of algae which usually form a part of the natural food chain. Duckweeds or other floating vegetation are also common, cutting off light which results in anaerobic conditions developing in the lower layers, leading to destruction of ecosystems. Water becomes turbid and foul smelling and very high Biochemical oxygen demand (BOD) and chemical oxygen demand (COD) associated with huge populations of coliform bacteria. Restoring these wasted water bodies is a major challenge, and our company, PERC, has recently taken up this challenge and developed a microalgae-based product.

Spending enormous money and building sewage treatment plants have not helped cleanse India’s polluted river stretches. The estimated polluted riverine length is 13,000 KMs approximately about 5 times the length of Ganga main stem (Down to Earth, March 2018). A Central Pollution Control Board (CPCB) report of 2015 brought out the fact that 61,948 million litres of urban sewage is generated on a daily basis in India. But the cities have an installed sewage treatment capacity of only 38 per cent of this. In reality more than this amount goes untreated into the rivers or water bodies as the treatment capacity of major sewage treatment plants (STPs) in the country is around 66 per cent of the installed capacity as per CPCB findings of 2013. As a result, more than 38,000 million litres of waste water goes into the major rivers, water bodies and even percolates into the ground every day. Over and above this there is industrial effluent. In October 2017, the Centre planned to focus on bioremediation technologies for cleaning Ganga at 54 new sites. In-situ treatment is simple and easy-to-operate and does not require major modification of the drain, said a note from MOWR (Down to Earth, March 2018).

Micro algae are primitive photosynthetic microscopic simple organisms which evolved on earth 1.4 billion years ago. Being photosythetic micro algae are the starting point of food chain in any aquatic ecosystem called as Primary Producers which are consumed by zooplankton and fish. Micro algae take up atmospheric carbon di oxide for photosynthesis and evolve oxygen. Micro algae also take up nutrients like nitrates, ammonia and phosphate from water for growth and metabolism. Huge number of beneficial symbiotic bacteria associated with these micro algae also help in purification of water by acting upon the organic load utilizing the oxygen released by algae. Through oxygenation of water micro algae can eliminate harmful bacteria and other nuisance algae establishing  a normal food chain (Fig 1).

Fig 1. The power of algae

PERC (Phycospectrum Environmental Research Centre), Chennai has been involved in development and implementation of micro algae based (bio) remediation technologies for the last 2 decades for dealing with industrial waste waters and domestic sewage. PERC in the process has developed a micro algae-based technology assisted by a nanotechnology-based product called PHYCOPLUS for restoring natural water bodies including lakes, drains and rivers. PERC has successfully restored a number of polluted lakes, drains and a river using this eco-friendly in situ technology. CPCB in its latest (June 2019) Indicative guidelines for restoration of water bodies has acknowledged this technology. PHYCOPLUS is composed of micro nutrients, trace elements, growth factors (hormones) and enzymes which facilitate faster restoration of polluted water bodies (Fig 2). Symbiotic association between micro algae and bacteria help in acting up on pollutants and bring about restoration of the aquatic ecosystem to normalcy well assisted by PHYCOPLUS, which enhances the metabolic activities of algae and bacteria. PHYCOPLUS also interferes with nuisance bloom forming cyanobacteria breaking its dominance.

This technology has been recently demonstrated by PERC in a village lake near Aligarh, Northern India. This lake received discharge from households of the village and agricultural run-off which contain huge amounts of nutrients and organic loads polluting the lake completely. The lake was covered with floating cyanobacterial mats and duck weeds which prevented light penetration. Water had a foul odor and color was blackish – and the village people almost abandoned this lake.