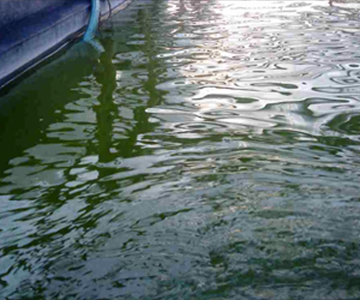 PERC has developed technology for mass cultivation of selected micro algae in open ponds and closed photobioreactors for biofuels, biofertilizer, cattle feed and other useful products. Parameters like nutrient addition, harvesting and processing have been standardized. Simple and cost effective harvesting technology (PHYCOFLOC) has been developed and being implemented in algal farms. A combination of open raceway ponds and bioreators has been developed to achieve maximum productivity which is economically viable. Economics has been worked out for large scale production of algae. Technology to utilize flue gas from thermal power station has also been developed. (CLICK HERE FOR A NEWS ITEM IN DECCAN CHRONICLE...Click here for news item in pdf).

Mass cultivation technology for marine diatoms has been designed and developed by our team in facility near Chennai coast. Nutrient addition, induction of lipid production and harvesting have been standardized. Based on the pilot scale trials economically viable seawater cultivation of marine diatoms for biodiesel is available with us for commercialization

PERC has developed a PMF technology to enhance algal productivity and oil content. PMF technology is ecofriendly, cost effective and easily scalable and xan be integrated with PBRs and open raceway ponds.

Algal species producing higher oil at field level have been identified and successfully cultivated in open raceway ponds. The techniques of harvesting, extraction and transesterification have been standardized. Cheaper nutrient sources and Simpler and effective harvesting techniques have been evolved to minimize the cost of production of algal biomass and oil extraction...