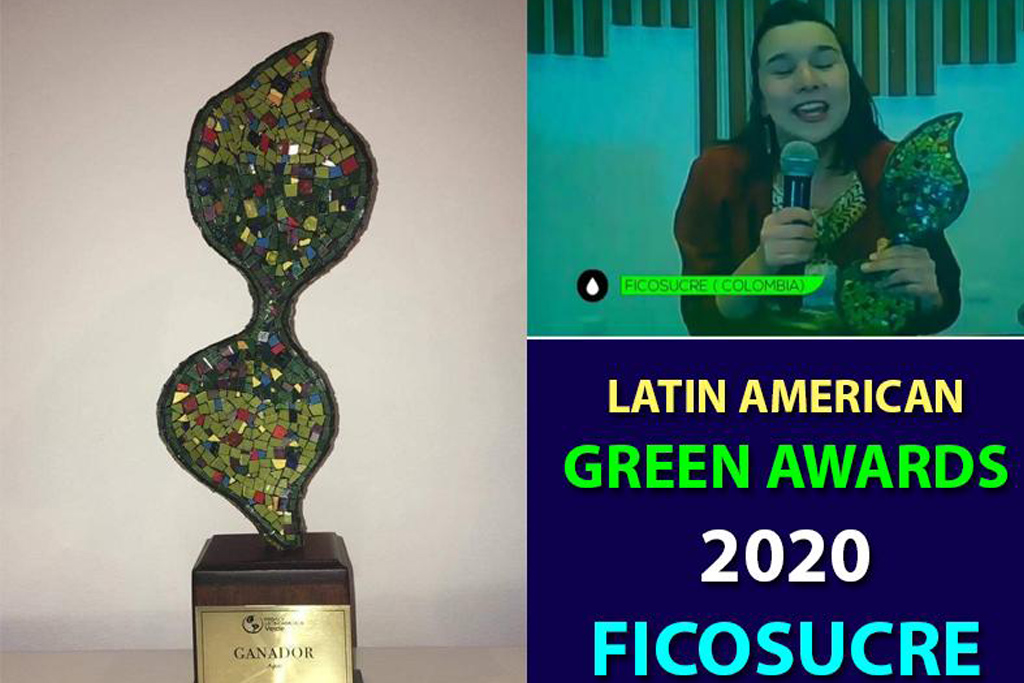 Ficosucre, recognized as the best environmental project in Latin America

The Ficosucre environmental intervention project, whose objective is to decontaminate the water ecosystem of the San Benito Abad municipality by means of microalgae, won first place in the Water category of the 2020 Latin America Green Awards presented on 22nd August 2020.

“We have had great joys: the first is to see how the microalgae have been so effective in this process of recovering the Santiago Apóstol Ciénaga and the Arroyo Grande de Corozal; the second, to work hand in hand with the Santiago Apóstol community, which has taught us that the problem of water pollution in our country is complex and requires comprehensive solutions, and today we add this immense joy for this recognition ”, said Natalia Acuña, from the initiative's team of researchers, who received the award at a virtual gala.

Ficosucre was recognized as the best environmental project in Latin America in the Water category, among 2,540 registrants from 25 countries. The other two nominees were works from the Paidea School Corporation (Colombia) and the Mexican company Alis.

The event is one of the most relevant sustainability festivals in the world, which rewards and makes visible the 500 best social and environmental projects in Latin America. The United Nations Development Program is one of its strategic allies

Ficosucre's success is based on the largest phycoculture plant in Latin America, built to produce more than 10,000 gallons of microalgae concentrate per day that are inoculated in the lower part of the Arroyo Grande basin, which discharges into the Ciénaga de Santiago Apostle.

So far, pollution from organic wastewater has been cut in half and harmful bacteria by 90%. Prior to this process, the swamp had a level of contamination 25 , which is four times more than the limit.

“It is the first time that a Science and Technology royalty project has won an international award; This is the best example of what can be done from the State-Company-University triad for the benefit of the country and its communities ”, assured Jaime Gutiérrez Fonseca, National Expert Advisor for the project.

The initiative is financed by resources from the Science and Technology Fund of the General Royalties System approved in August of last year, amounting to $ 13.8 billion. They are executed by the Ministry of Economic Development and Environment of the Government of Sucre, in alliance with the Simón Bolívar, Sucre and Los Andes universities, and the Phycore and Coschool companies.

To give it the appropriate scientific support, the largest and most important Microalgal Technology Laboratory in Colombia was built at the Simón Bolívar University. Scientific studies and the initial selection of the microalgae conglomerates to be used in the water body are carried out at its facilities.

“This cutting-edge home-made technology is showing surprising results in terms of water decontamination , in addition to being environmentally friendly, much cheaper than traditional technologies and giving us the possibility of producing energy from biomass resulting from the bioremediation process ”, pointed out José Rafael Consuegra, dean of the Faculty of Health Sciences of Unisimón and director of its research group on Biotechnology and Innovation.

An innovative aspect of Ficosucre is the work with the community of San Benito Abad and the 447 thousand inhabitants of the towns near the Arroyo Grande de Corozal and the Ciénaga Santiago Apóstol. With 130 leaders and young people from the municipality, the project integrates their knowledge about the swamp and has motivated them to lead actions for its conservation, while allowing them to learn about the process of phycoremediation with microalgae.