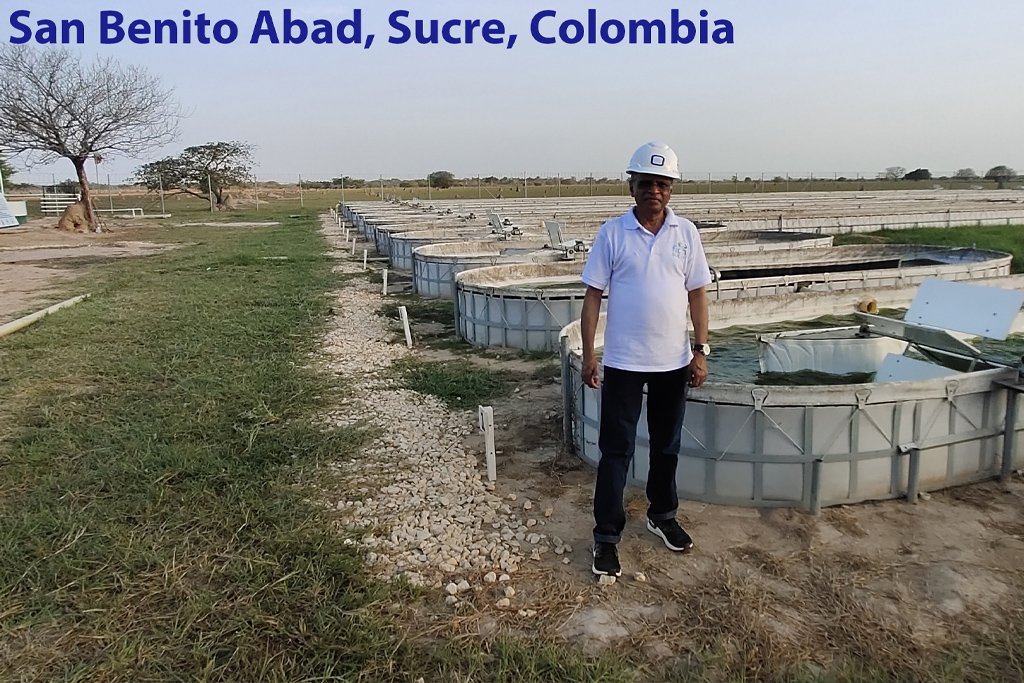 This is how microalgae are being used to decontaminate swamps in Colombia.

Phycospectrum, Chennai in collaboration with CORE Biotech Colombia established PHYCORE which is handling projects on restoration of polluted water bodies and industrial effluents in Latin America..The technology PHYCOPLUS developed in India is being implemented in Latin America...FICOSUCRE is one such project involving Simon Bolivar University, University of Sucre and Las Andes of Colombia...

Microalgae have become one of the most promising technologies for treating polluted water in the world. In Sucre, the first large-scale decontamination project of a swamp is being carried out in the country using this technology, which so far has managed to eliminate more than 90% of disease-transmitting bacteria and reduce organic contamination by 50%.

At the Simón Bolívar University, the largest Microalgal Technology Laboratory in Colombia was built for this project. / Photo: Courtesy Unisimón.
By: Daniela Quintero Díaz / @Danielaquinterd

After walking an hour and a half by road from Sincelejo, San Benito Abad is located in the rural area of ​​Sucre, the largest municipality in the department and where a large part of the region's muddy complex is located. There, in the middle of nowhere, is also the largest microalgae cultivation plant in Latin America, which is helping to decontaminate the Santiago Apóstol swamp with a project that, on August 22, received first place in the Awards Latin America Verde 2020, in the water category.

The Santiago Apóstol swamp, like many of the 132 swamps in the department of Sucre, has suffered for years from contamination from activities such as livestock, agriculture, sedimentation, and sewage discharges from neighboring municipalities. The Arroyo Grande de Corozal, which flows into the swamp, receives discharges from five neighboring towns that do not have wastewater treatment plants.

The Ficosucre plant produces more than 10,000 gallons of microalgae concentrate per day to carry out the decontamination process of the swamp.

“This swamp is an iconic contamination case in Sucre. In 2018, its level of contamination was four times above the limit established by the environmental authority, ”says Jaime Gutiérrez, a researcher on the project and an expert on microalgae. "However, the problem had not been addressed because decontamination technologies are very expensive, they use a lot of energy, contain chemicals and with a decontamination process on this scale they are priceless or very damaging to the ecosystem."

An alliance between the University of the Andes, the University of Simón Bolívar, the University of Sucre, the Government of Sucre and two Colombian start-up companies seems to be achieving what was previously unthinkable: with the help of microalgae, the swamp water quality indices in a matter of weeks. Phycoremediation is the technical name given to the study of decontamination by means of algae and Ficosucre is the project that arose in response to the contamination of the water bodies of San Benito Abad, where many communities have traditionally dedicated themselves to fishing.

Microalgae technology
Microalgae have become one of the most promising technologies for the treatment and decontamination of bodies of water around the world. They have even positioned themselves as an alternative to wastewater treatment stations, as their technology is more versatile, simple and cheaper than traditional technologies. In Colombia, the Los Andes Center for Microbiological Research (CIMIC) had been working for years on decontamination with bioremediation mechanisms (bacteria and fungi), but in 2013, with Gutiérrez's doctoral research, microalgae technology began to be implemented.

The project takes the microalgae that are present in the Santiago Apóstol swamp and takes them to the laboratory, where the species that can "eat" the pollutants present in the swamp are chosen. There they are strengthened and bio-augmented before being returned to the water body.

“Microalgae are like the great, great, great-grandmothers of the plants we know. They are very old, and they have a metabolic apparatus that allows them to take pollutants and use them as food. In this process they decontaminate the water ”, explains the expert. “Pretend they work like an apple tree. If you take a spoonful of compost, surely you are going to be intoxicated, because it is a toxic substance for us humans. But if you put that same tablespoon on the root of the tree, it will absorb that substance and turn it into a biomass that is not toxic and is useful as food: the apple. What we do is make the most of this characteristic that microalgae developed after millions of years of evolution ”.

In short, what the Ficosucre project does is take the microalgae that are present in the Santiago Apóstol swamp and take them to the laboratory, where the species known from the literature and experiments that can "eat" the contaminants present are chosen. in the swamp. “Once we have them identified, we bio-increase them. That is, we strengthen them, 'fatten' them and take them to reproduce in the plant that we have in the rural area. When they are enlarged and concentrated, we return them to the swamp, where they are in charge of doing the decontamination work ”, assures the researcher. Twelve of the 78 species of microalgae found in the Santiago Apóstol swamp are being used to clean it.

At this plant, located in the rural area of ​​Sucre, microalgae are reproduced on a large scale before being returned to the swamp for the decontamination process.
The results, in a short time, are promising: 2,152,000 liters of water have been cleaned, eliminating more than 90% of disease-transmitting bacteria and reducing organic contamination by 50% in this swamp. Other experiences, such as the decontamination of the Mallorquín swamp, near Barranquilla (where the first microalgae decontamination pilot was carried out in the country), also yielded good data. “The organic load, which is what we call sewerage contamination, should have been below eight, but it was at 700 before the intervention began. It was a sewer. We began to inoculate the microalgae and in five weeks the organic load dropped to six, ”Gutiérrez explains. That project was the preamble to bet on decontaminating the swamp in Sucre,

In addition to the decontamination phase, the project had a characterization phase and another for management and knowledge transfer. According to Gutiérrez, it is the first time that an analysis and characterization process has been carried out in such an extensive body of water in Colombia. "They were 18 months taking twenty samples in the swamp and four in the stream, in triplicate," he says. In addition, DNA characterization is being carried out on all the fish present in the swamp and, in particular, the catfish and the bocachico, which are of great importance to the fishermen of the region.The field microbiologist is in charge of monitoring the Ph, temperature and dissolved oxygen of the swamp water, as well as constantly looking at the microalgae under the microscope to monitor their health and avoid negative impacts on the water body.

Researchers constantly monitor the health of the microalgae to prevent negative impacts on the ecosystem.
The project also sought to involve the communities that have historically lived in the swamp. “Through the participatory action research methodology, we are dedicated to transmitting the knowledge of microalgae to the community. Students, fishermen, social leaders and mothers were able to get to know this technology up close and we already have several research and entrepreneurship initiatives that emerged from these processes. In my opinion, it was also this humanistic part of the project that helped us to score many points and obtain the 2020 Green Latin America environmental award, where we competed with 2,540 other projects from 25 countries, ”says Gutiérrez.

Henceforth, the team made up of botanists, chemists, microbiologists, biologists, ecologists, historians, anthropologists and psychologists seeks to achieve much more ambitious goals. On the one hand, make an expanded program (Ficosucre 2) to decontaminate the entire water system of San Benito Abad and recover the ecosystem based on this technology. On the other hand, they hope to bet on the sustainability of the project with the installation in the region of four BioPowerPlants, a new type of third-generation biorefineries, which - thanks to a reactor that they patented in February and that can convert microalgae into energy - would allow use wastewater as an input to produce clean energy, biofuel and water with optimal conditions for agricultural irrigation.“We believe that microalgae have that transformative power.