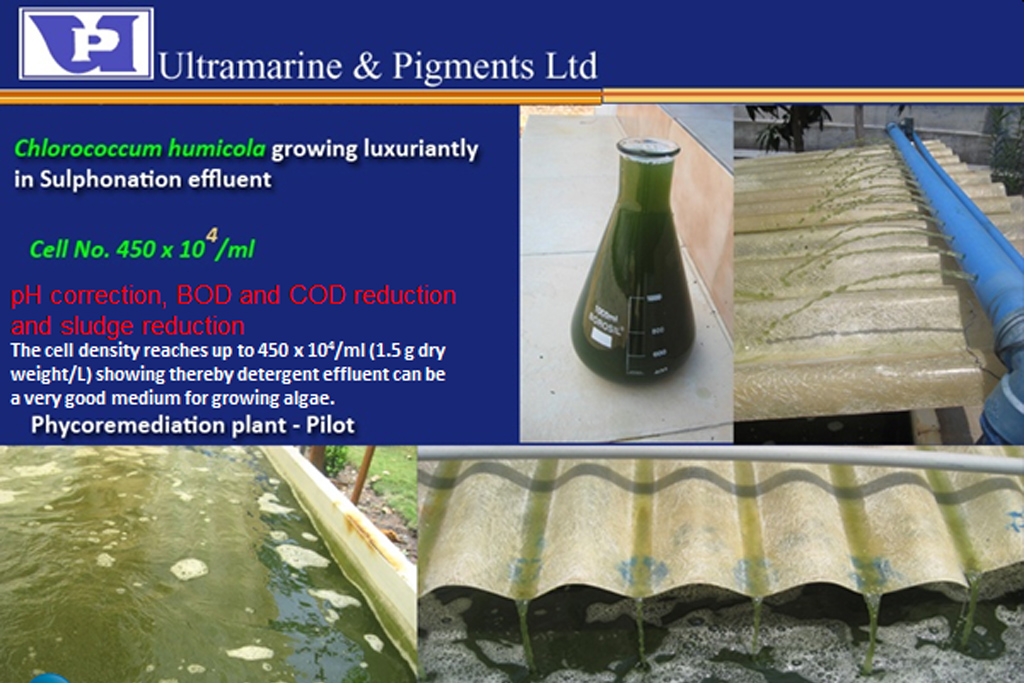 Handling of acidic and high TDS effluent from sulphonation plant

Phycospectrum has developed algae based technology to handle a high TDS acidic eflfuent from a detergent industry and implemented very successfully at pilot scale.

Ultramarine Effluent Pigments Limited, situated at Ranipet, India. Ultramarine and Pigments limited is one of the largest pigment and surfactant manufacturing company. Ultramarine blue and Linear Alkyl Benzene Sulphonic acid (LABSA) are the two major products of the industry. Ultramarine blue is a very safe product, non-hazardous pigment with a variety of applications worldwide. LABSA is an anionic surfactant widely used in the formulations of all ranges of domestic detergents and dish wash liquids.

The Ultramarine and Pigments limited generate nearly 60 - 70 KL of acidic effluent per day. The raw effluent contains residual pigments and chemicals (Organic and Inorganic). The effluent was managed by conventional method. The effluent was treated with lime to correct its pH. The treated effluent was kept in solar evaporation ponds for evaporation resulting in huge amount of sludge formation.

Both laboratory and pilot plant studies were undertaken for the purpose of developing a suitable phycoremediation technology using micro algae. Based on the laboratory scale and pilot scale studies recommendations will be given to the industry to scale up this technology.

Aim and Scope of the study

1. Collection, isolation and maintenance of algal strains for effluent treatment.

2. Laboratory screening studies to select suitable strains and to indentify parameters to be managed while scaling up

3. Conduct pilot scale trials to collect valuable data which will be useful when scaling up

4. Studies on the possible utilization of valuable biomass generated

5. Give recommendations for scaling up

6. Environmental Impact Assessment in order to determine safety of the technology developed

Ultramarine and Pigments limited is one of the largest pigment and surfactant manufacturing companies. They have two factories in South India. One of them is situated in Ranipet, an industrial town 110 kilometers northwest of Chennai. It specializes in the manufacture of inorganic pigments and organic surfactants with international quality standard.

Ultramarine and Pigments Ltd is equipped with an excellent infrastructural setup which includes most modern production equipments, process and Quality control instruments, continuously updated technical know-how, Quality management and assurance systems. The Quality assurance system ensures that every batch of products conforms to the grade specification in all aspects.

Ultramarine and Pigments Ltd., with a sense of social concern, realizes its responsibility to protect and improve the environment with a conviction to conserve natural resources and minimize the generation of waste. The company educates their employees in working towards the company objectives and goals on environment management system. The company recognizes and complies with all statutory requirements pertaining to environmental performance of the manufacturing facility.

Ultramarine blue is a very safe, non-hazardous blue pigment with a variety of applications worldwide. Its synthetic manufacturing process and possibility for close control over its physical, chemical, and colour characteristics enable the production of several types of this blue pigment, which are readily accepted by plastic, printing ink, paint, cosmetic and many other industries due to advantages over other organic pigments and dyes. Besides, Ultramarine blue is an environment friendly pigment available to the industry today.

2. An optical whitener on fabric, paper, plastics, rubber and paints.

5. White paints of all types (whitening agents) and Stoving finishes

Linear Alkyl Benzene Sulphonic acid (LABSA) is another product of Ultramarine pigments limited which is produced in the most sophisticated "Falling Film Reactor", with Italian technology. The process is automated fully with most modern computer aided process equipment to produce high quality products with consistency. LABSA is an anionic surfactant widely used in the formulations of all ranges of domestic detergents and dish wash liquids. It is best suited for the manufacture of all types of detergent powders and cakes. Due to its high active matter, quick miscibility with water and low salt content, it easily finds its way in to variety of liquid formulations.

1. It is the main active detergent in all forms of detergents like cake, powder and liquid formulation

2. It is used as an emulsifier and wetting agent

3. Used in small quantity with other surfactant in toilet soap for foaming

The Ultramarine and Pigments limited generates nearly 60 - 70 KL of effluent per day. Effluent generated is from two plants namely Blue wash plant and Sulphonation plant. Effluent produced from the plants comes in stepwise process. Effluent accumulated from stepwise washes is neutralized and stored in open ponds for a long period in the industry premises as it is unfit to be let out in to the environment. Over the years they have been trying to solve the problem by solar evaporation.

The raw effluent contains residual pigments and chemicals (Organic and Inorganic). The effluent is dark and turbid with an offensive smell. The acidic pH of the effluent varies from 0.6 – 1.3. The TDS content is very high (75000 – 150000 mg/L). The chemical contents like sulphate, sodium and chloride are very high. It also has a considerable amount of calcium and magnesium. Iron, fluoride and phosphate are in negligible amounts. The COD is very high when compared to BOD.

The pilot sloping tank was constructed in the industry premises with a dimension of 3m in length, 1.5m width and 30cm in depth. Algal Culture was made ready in the tank to the volume of 1KL with CFTRI outdoor culturing medium. Algal cultures were inoculated into the pilot tank and grown with regular nutrients. Effluent sample was added at a selected dose with a continuous flow arrangement. The flow rate of the effluent was maintained at 120 LPH (Litres per hour).

Feasibility study was conducted by growing various micro algae in the Ultramarine pigments and limited effluent using the micro algal species from the VIAT (Vivekananda Institute of Algal technology, Chennai.) culture collection. Seven species of Micro algae used for the study are listed below.

The tank was filled with 1KL of raw water. The nutrients were added to the raw water in the tank as per the guidelines of CFTRI, Mysore for outdoor cultivation. Chlorococcum humicola culture was inoculated in to the tank. The culture in the tank was given robust mixing twice a day using wooden planks to increase the growth rate of the Micro algae. Phycoremediation study was started after 10 days.

Everyday 50 L of effluent was added to the algal culture in the morning to the tank. The culture in the sloping tank was mixed every hour to facilitate the phycoremediation process. The flow of treated effluent on the trenches on the slope is shown in Plate 1. The parameters like the pH, temperature, TDS, cell count of Micro algae and evaporation rate were recorded every day. The micro algal cell count was maintained by adding nutrients like Sodium bicarbonate and NPK periodically.

During the initial stage of the study the TDS increased day by day. After 30 days the effluent quantity was reduced to 40 L and it was added throughout the day by using a small tank with a tap. After the modification the TDS percentage started reducing. As the study was nearing completion, the effluent load was reduced up to 20 L per day. The study was carried out for 70 days and 2820 L of effluent was added to the tank for phycoremediation. The result of the pilot plant study - I using Chlorococcum humicola is shown in Table 12.

The final pH and TDS of the treated effluent was 6.44 and 425900 mg/L respectively. The cell count of Chlorococcum humicola was 1080 X 104 cells/ml. The reduction of TDS of pilot plant study 1 was calculated and shown below. The TDS reduction achieved was 25.25%.

The method of study is similar to pilot plant study – I. The effluent was loaded into the tank by using a continuous flow arrangement

The quantity of effluent added during the initial stage of the study was 10 L and as the study was nearing completion the effluent load was increased up to 18 L per day. The study was carried out for 80 days and 946 L of effluent was added to the tank for phycoremediation. The result of the pilot plant study - II using Chlorococcum humicola is shown in Table 13. Pictures of Chlorococcum humicola growing in ultramarine effluent is shown in Plate 2 (conical flask) and Plate 3 (sloping tank).

The final pH and TDS of the treated effluent was 7.68 and 87120 mg/L respectively. The cell count of Chlorococcum humicola was 1900 X 104 cells/ml. The reduction of TDS of pilot plant study II was calculated and shown below. The TDS reduction achieved was 50.6%.