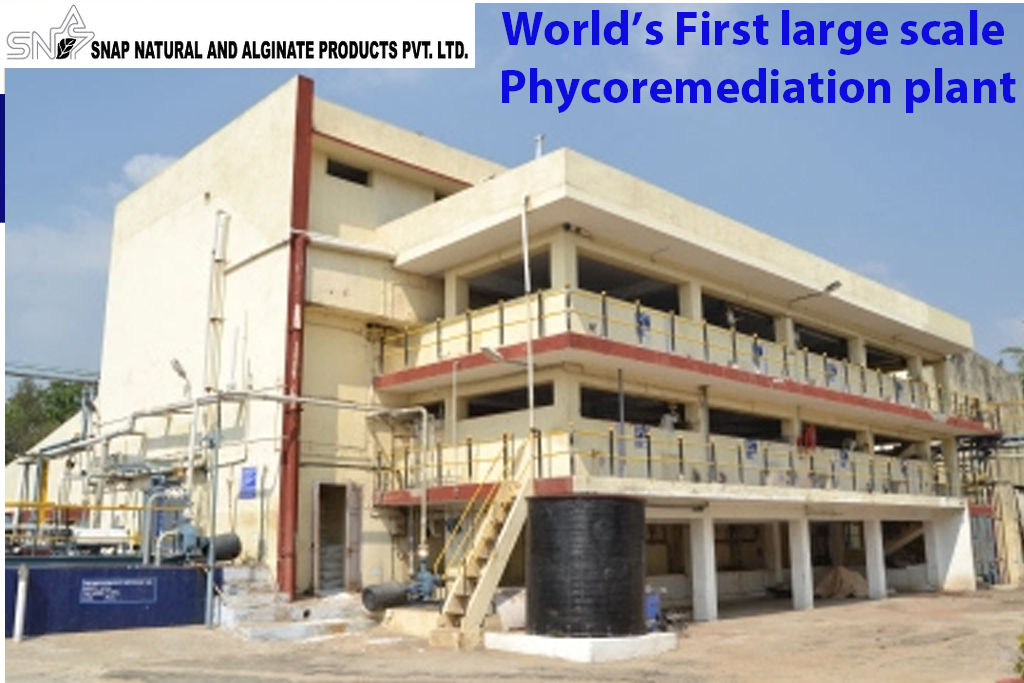 Estabilished in 2006 at SNAP Industry by Phycospectrum

SNAP Alginate and Natural Products Ltd. situated at Ranipet, Tamil Nadu, India, is involved in the production of alginate of various grades from Sargassum sp. Their liquid effluent (generated at 30 kl per day) is highly acidic (around pH 1.4–1.8) due to the use of sulphuric acid as their process material. The Pollution Control Board regulations require that the acidic effluent is neutralized, and the industry was using caustic for that purpose. The solar ponds used for evaporating the effluent were converted to high rate algal (HRA) ponds and a pilot slope tank study was undertaken to shorten the duration of the pH increase, which was later scaled up.Preliminary laboratory experiments revealed that Chroococcus turgidus, a cyanophycean microalga, has the potential to increase pH and decrease total dissolved solids (TDS) and has a wide tolerance to pH and high salinity.

SNAP manufacture alginic acid and its various salts from the brown algae Sargassum and Turbinaria which are procured from the Gulf of Mannar, South India. In the industry, seaweeds are treated with mild acid for removal of unwanted salts and then treated with alkali for conversion of alginic acid into sodium alginate. The digested pulp is then diluted and settled and sodium alginate is recovered.

SNAP generates a solid and a liquid discharge. The solid discharge consists of the remains of seaweeds after the extraction of alginates which are composted. The liquid discharge is the wash water of the seaweeds, which is acidic and essentially contains organic TDS, sea salts, and sea sand.The spent water generated was divided in to three main categories: neutral, alkaline, and acid streams. The neutral water stream consists of wash water of various process equipments, tanks and floor, and the condensate water from the boiler. The alkaline water stream is produced during the digestion. The seaweeds are digested under alkaline conditions. The digested seaweeds are diluted with water and settled to remove the seaweed residue. The supernatant liquid from the settler is taken for further processing. The seaweed residue is further washed thoroughly and dewatered. The collected water is taken in the ‘alkali water recycle’ tank and reused for diluting the digested seaweeds. As for the acid water stream, the supernatant liquid from the settling tanks is acidified and precipitated to recover the product. The acidic water is collected in the acidic water recycle tank. A portion of the acidic water is neutralized and taken with the alkali recycle water and reused for diluting the digested seaweeds. A portion of the acidic water is reused for washing the seaweeds. About 30 kl of acidic water as a blow down is sent to the treatment plant. The acidic water was neutralized with caustic soda by the industry, settled to remove the total suspended solids and evaporated on solar evaporation ponds (SEPs). The dried solids were recovered from the SEP and stored in a secured landfill.

C. turgidus was isolated from SNAP ETP site and identified following the monograph of Desikachary28. As Chroococcus sp. can grow in both fresh water and salt media, it was first inoculated in Bold Basal medium and was then transferred to F/2 medium for maintenance. Laboratory cultivation was carried out at 24±1°C in a thermostatically controlled room and illuminated with cool white fluorescent lamps (Philips 40 W, cool daylight 6500k) at an intensity of 2000 lux in a 12:12 light dark regime.

The SEPs were built to evaporate the liquid effluent after neutralization. The total area covered was 11000 m2. The number of ponds built was 11. All the ponds were built in concrete and had a depth of 45 cm. Each pond is interconnected in such a way that the flow of effluent is by gradient. 30 kl of effluent is the input per day. To evaporate 30 kl of water per day at 4.5 mm per day the required area of the pond is 6750 m2. For our experimental purposes, Tank A (40 m×47.5 m×45 cm) was used. The area covered was 1900 m2 and the total capacity was 8850 l. The depth of the effluent was maintained below 40 cm. The SEPs were later termed HRA ponds when phycoremediation was employed. No mixing, agitation, or aeration was done.